Whitney Lewis-Smith is a photo-based artist who works primarily with 8x10 glass plate negatives and elaborate set building. She is currently examining Biophilia, a term coined by renowned psychologist Erich Fromm describing how humans possess an innate tendency to seek connection with nature and other forms of life. As of 2008 The United Nations says more than half of the world lives in cities and the average pre-teen recognizes more video game characters than common wildlife. With today's accelerating technological advancements Lewis-Smith has become preoccupied with the evolution of humanity’s relationship with the natural world. During a production residency at The Museum of Natural History in Puebla, Mexico she worked with specimens that became a catalyst for her recent series discussing consumerism and the environment. Drawing from the “impossible bouquet” originating in dutch golden era painting Whitney uses the photograph to document what can now be amassed in the flesh, by internet purchase or otherwise, highlighting how globalization impacts the way we interact with the world around us. By depicting scenes that will again become an impossibility Lewis-Smith asks the viewer to recognize our current time as a passing moment. 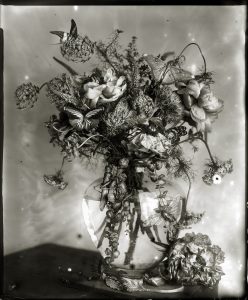