Lyle XOX: back to Artist

If Sconces Could Talk

For Lyle, art has always been at the core of his being. Some of his initial memories of life are associated with some medium of art. Falling asleep with crayons in his hand (with photo documentation from his Mother to substantiate) to creating full productions with props and costume changes; all before embarking on elementary school. Life and Art have, and always will be one in the same; both exist in a symbiotic relationship with one another. Lyle Reimer’s life began in Wymark, Saskatchewan a small rural town with less than 200 people. Reimer soon came to the realization that thinking outside the proverbial box was not only necessary but critical to survival. Being raised as the youngest of four, these “survival skills” were handed down primarily from his mother. She nurtured these artistic skills and encouraged Reimer to create something from nothing. She highlighted recycling long before it was fashionable; television was not part of the home environment; books, coloring pencils and fort building in the great outdoors were the assets of childhood. When those around him spent time playing Hockey and working on the farm with heavy machinery, Lyle spent his time playing dress up, learning to ride the unicycle, and creating an endless array of pieces of art to decorate most of the home’s surfaces. After Graduating High school, Lyle began to carve out a path that would include travel. Creating large scale commissioned murals was his first foray into art for monetary value and allowed him to begin to see other parts of the country. International travel was high on the priority list, and so enrolling in a live/work exchange program in Cuba was added to that list. It was there that he started to see life in the bigger picture and realized that art would be integral to his career path. Through creating artistic projects with little to no supplies at the Culture house in rural Cuba, he was able to access the core values that were given early on in life: making something from nothing. Upon coming home to Canada, Reimer began seeking out possible careers in artistic fields that would complement his love for art, fashion and design. It was during that search that the love of the art of Makeup was reignited. An aunt who lead a very international, culturally diverse life presented makeup to him as a young boy, and served as inspiration to begin schooling in the field. Packing up and moving to Vancouver, Canada was the next step in the journey to gain education and experience in a more metropolitan environment. Lyle worked in fashion retail while going to Applied Design School allowing room for both his love of clothes and style as well as painting on living canvases. He began working with local photographers, dance companies and hair salons doing makeup and styling to create a portfolio. Shortly after graduation Lyle began a career in Makeup with M.A.C Cosmetics and spent sixteen years honing his craft and building loyal clientele there. The world of social media came into Lyle’s life and with the aid of Instagram, his mixed media self portraits accessed a whole new market. Within two years of joining the social media platform, a gaining of celebrity followers and personal industry idols took place. With the onset of media attention around the globe, magazine editors and photographers began to contact and book Lyle for work. Luxury fashion label, Gucci contacted him personally and invited him to be a part of the very first Guccigram project which gained world wide notoriety. Bea Akerlund, longtime stylist of Madonna and Beyonce, reached out to Lyle to be a part of a collaborative children’s book showcasing international celebrities, fashion designers, pop stars and artists. Lyle has been published in publications around the world including New York Times, Huffington Post, Vogue Italia, V, Paper Magazine, SURFACE, Models.com, GQ China, CANDY Magazine, TUSH Magazine, CR Fashion Book, iD, and countless international blogs and fashion forums request interviews regularly. In February, 2019 Condé Nast/ Vogue named Lyle in the top 100 creative voices around the world; pushing the boundaries of art and fashion. Most recently Rizzoli published a book of Lyle’s work, “Lyle XOX Head of Design”. Art direction by Fabien Baron and foreword written by dutch design duo Viktor & Rolf. The book was recently awarded an international photography award under the category of photography books about people. Legendary New York retailer Bergdorf Goodman commissioned Lyle to create 2 window displays in celebration of the book, with Linda Fargo hosting a book signing. A documentary was created about Lyle and his work, “Random is My Favorite Color”, and was released in August of 2019. 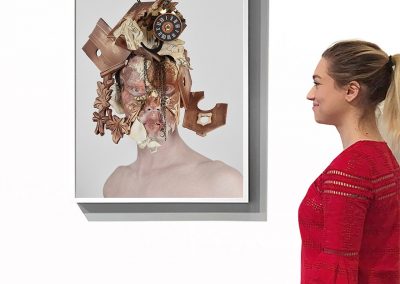 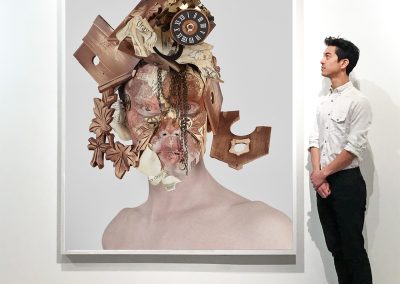