William Betts: back to Artist 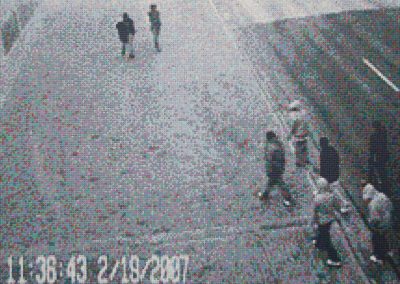 Living in a world where we are constantly watched from satellites, airplanes and stationary video cameras on our roads and in our cities, Betts’ latest paintings address a contemporary world in which surveillance is widely used as both a deterrent and for social control. Inspired by the writings of Jeremy Bentham on the Panoptic on and Michel Foucault in his work Discipline & Punish, he explores the sociological and philosophical implications of video surveillance in contemporary society.  “I am interested in how far removed I can get from the subject and the painting itself and still make paintings” says Betts, “today we have so many layers between the individual and direct experience, it fundamentally changes how we see the world”. I play with dimension and scale, continuing to push our sense of perception through manipulation of resolution.

In the late 1800’s, Georges Seurat’s observations of public scenes were large-scale paintings covered in a system of vertical and horizontal coordinates executed with tiny dots of brilliant color. Betts pushes the self-contained rectilinear field to a new technological level by imposing the grid and then creating and using a computer controlled linear motion technology and a proprietary software system to precisely apply thousands of drips of paint. Further, the graininess of low quality video and the “slice of life” subject matter of the Pointillism master are married, refocusing Seurat’s intent into a new view of containment both visually and within contemporary social and moral arenas presently surrounding video monitoring and recording by individuals, corporations and government.

Born and raised in New York City, resided in Houston Texas and is currently based in Miami Florida. In 1991, graduating with a Bachelar of Arts, Studio Art-Cum Laude from Arizona State University, William Betts has exhibited throughout North America and Europe. His artwork has been featured in the group exhibition, Rasterfahndung (Tracing the Grid), Kunstmuseum, in Stuttgart, Germany, in the Arlington Museum of Art, The University of Texas, The Salt Lake City Art Center, The University of Wisconsin, Eau-Claire, and the Albuquerque Museum. His selected Bibliography includes The Creators Project (video interview), June 2016; Politiken, Københagen, Photo Essay, March 28, 2016; Kinetic, Art from Polsinelli Art Collection, Privately Published 2015; Victoria Machmudov, Under övervakningsradarn, Konstperspektiv, Sweden, June, 2014 and Rasterfahndung (Tracing the Grid), Kunstmuseum Stuttgar (Show Catalog). He was named New American Painting Annual Prize winner in 2011 and featured in issues #60, #72, #84, and #96 William Betts had a career in tech industries where he established proficiency in computer language and programing. From this, he uses complex industrial processes to create paintings that reflect the possibilities for an analog medium in a digital age. Betts uses his own source material (photographs/videos) as data sets to be examined, sampled, re-contextualized, manipulated and represented. Typically less interested in content and more concerned with the structural and social aspects of the image.