Alex Couwenberg: back to Artist

Born to and raised by Dutch-Indonesian parents in Southern California, Couwenberg spoke both languages at home and was taught to understand and appreciate the craft of Indonesia, and the art associated with the Dutch masters. His childhood was thus influential in the development of his career in visual art. Together, with the aesthetics of his California experience (surf, skate, and hot rod culture), Couwenberg’s paintings visually layer archetypes or reinterpreted forms into a contemporary conversation with mid-century modernism. For Couwenberg, the build up of layers, coupled with exposed underpainting, represents the artist’s reflection on his relationship with his personal and cultural history; he intends to find and create a middle-ground between expressionism and hard-edge abstraction. Beautiful surfaces, bold minimalism of color, and asymmetric compositions produce works that are muscular and dynamic, or quiet and elegant, presenting a kind of contemplative soliloquy. Couwenberg’s formal art education initiated with an Illustration Degree from the Art Center School of Design in Pasadena, California, and culminated with an MFA from Claremont Graduate School, working under the mentorship of several senior painters most notably hard-edge California abstractionist, Karl Benjamin. Couwenberg has shown throughout the United States, Europe and Asia in solo and group exhibitions. His work is in several museum collections, most recently in the permanent collections of the Laguna Art Museum, CA, and the Pomona College Museum of Art, CA, and has been included in Out of Line, a traveling exhibition curated by the Riverside Art Museum CA, which focuses on the contributions of non-objective painting in Southern California. He is currently featured in a two person exhibition in Los Angeles held in conjunction with the Getty Museum’s “Pacific Standard Time” project. In 2007, Couwenberg was awarded the prestigious Joan Mitchell Foundation Award for his achievements in painting. 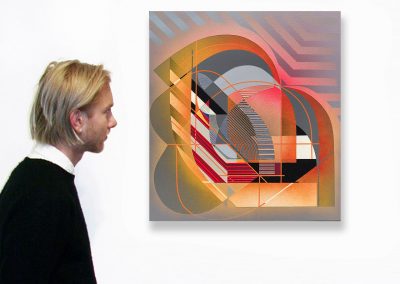